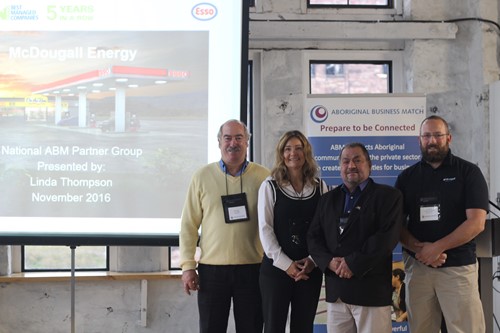 TLA’AMIN TERRITORY, BC – The Aboriginal Business Match (ABM) connects Aboriginal and non-Aboriginal decision makers to create opportunities for business. Produced seven times a year across Canada, the National ABM Network comprises of business-ready communities and companies who are in tune with the unique characteristics of Aboriginal economic and business development.

Delegates who attend go through a selection process made by the National ABM Partners Group who provide real-world and bottom-line oriented marketplace expertise, ensuring ABM provides the highest value possible to its decision makers. Now the six-person team based in Tla’amin Territory is pleased to welcome the newest addition to its National Partners Group: McDougall Energy.

“McDougall Energy has attended ABM in Western Canada since its inception in 2012.” says Darren McDougall, President of McDougall Energy Inc. “We experienced first-hand the positive impact being part of the ABM National Network has had on our business and the connections we are able to make in the Aboriginal marketplace. It is a natural fit for our company to support and become part of the National ABM Partners Group.”

Prior to attending this 2.5 hyper-productive event, delegates create a schedule of pre-selected appointments using ABM’s sophisticated business matching software. Delegates can prepare for effective and efficient conversations that translate into partnerships, joint ventures and more.

The results are clear:

“ABM is an unprecedented business development forum that connects businesses with Aboriginal decision makers,” McDougall continues. “Half of our business from First Nations out West is a direct result of ABM. It is a staggering number that illustrates the value we get from partnering with the National ABM Network.”

McDougall Energy Inc. (“McDougall Energy”) is a Canadian, privately owned, family business which has been serving energy customers for over 70 years. The company is a marketer and distributor of heating oil, propane, gasoline, diesel fuel and commercial lubricants, as well as an Esso retailer. McDougall Energy won the Canada’s Best Managed Companies award in 2011 through 2014 and became a Gold Requalified member in 2015. Now in its third generation of ownership, the energy company serves communities throughout Canada. The company is headquartered in Sault Ste. Marie, Ontario. McDougall Energy’s business model serves distinct customer groups by providing products and services in the Home, Business, and Auto markets.

ABM is created by and is a trademark of Raven Events, Sliammon, BC.